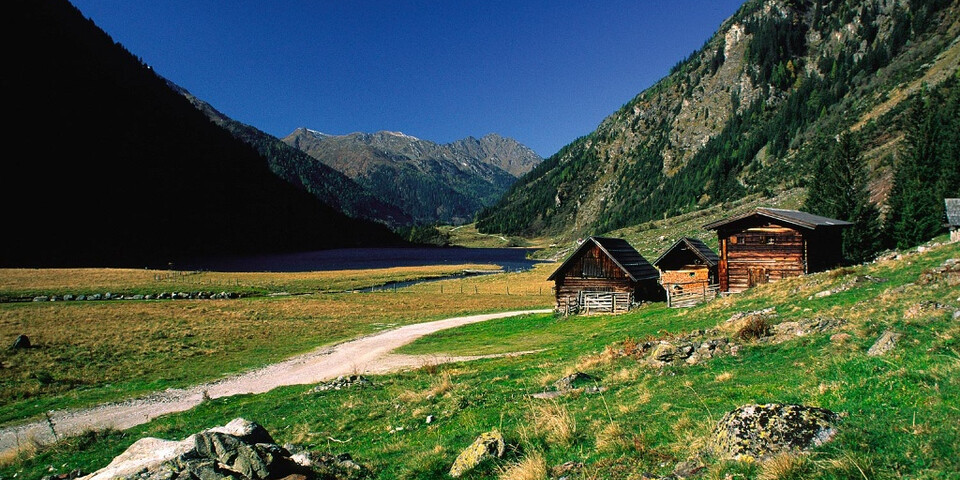 The highlights of this tour range from crossing the highest elevation on the eastern edge of the Alps, the Stuhleck, to crossing Austria's largest contiguous forest area, Peter Rosegger's forest home in the Fischbacher Alps. Also crossing a unique alpine pasture area around Teichalm and Sommeralm, to crossing the Niedere Tauern on the Schladminger Tauern Höhenweg. Attention: The section through the Bärenschützklamm ravine is closed due to a rockfall! The ravine can be bypassed via the hiking trail leading north of it, from the restaurant Zum guten Hirten to Mautstatt.
The Central Alpine Trail with the number 02 was opened in 1978 and deserves to be called a high-altitude route. The Niedere Tauern in particular require not only suitable equipment but also surefootedness, a head for heights and orientation skills. At the beginning, the tour leads us from Spital am Semmering to a historic peak: in 1892, the Stuhleck was the first Alpine peak to be climbed on skis. We continue our hike across the Fischbach Alps parallel to the hiking route "From the Glacier to the Wine", the long-distance hiking trail in Styria, to the Teich and Sommeralm, the largest contiguous cultivated alpine pasture area in Europe. The trail continues over the northern part of the Koralm into the Mur valley, where we enter the Niedere Tauern via Seckau, famous for its monastery. We cross these from east to west along the well-known Schladminger Tauern Höhenweg trail to finally reach our destination in Schladming in the Ennstal valley.

From Spital am Semmering, we first climb to the summit of the Stuhleck, the highest elevation on the eastern edge of the Alps, with the Alois Günther Haus. On clear days, we can overlook about a third of the entire national territory and see as far as Hungary and Slovenia. The rest of the trail takes us leisurely along the ridge via Peter Rosegger's Waldheimat and the Teufelstein, one of Austria's oldest cult sites, into the natural park Almenland. We then head towards Rennfeld, where we enjoy the impressive panorama before descending to the historic town of Bruck an der Mur.

From here, we continue via the Hochanger Schutzhaus, where we rejoin the main path of the Central Alpine Trail, and the ridge of the Herrenkogel and the Hochalm to the Gleinalm Schutzhaus. Here, the beautiful little church "Maria Schnee" awaits us. The trail continues over pleasant alpine pastures and through shady forests towards Steinplan and then descends to Knittelfeld in the Murtal valley.

Leaving the town of Knittelfeld, the trail climbs up to the Tremmelberg with its beautiful lookout post, offering us a wonderful panorama. The next highlight is Seckau Abbey in the town of the same name at the foot of the Seckau Alps. This is the entry point to the Niedere Tauern and the Central Alpine Trail becomes an alpine tour. We start with the Ingeringsee, still an insider's tip among the countless mountain lakes in the Tauern. Then it's off to the Bergerhube near Hohentauern, a popular mountaineering meeting place.

Over alpine pastures and through high alpine terrain, the trail leads to the beautifully situated village of Hohentauern and on to the Edelrautehütte. After that, it gets really challenging, as the trail is a perpetual up and down in this beautiful landscape. Next destination: the Planneralm. From the Planneralm we go up to the Karlspitze before descending to Donnersbachwald. Via the Mörsbachhütte, the tour continues into the natural park Sölktäler. From St. Nikolai in the Sölktal, the route goes over the Schladminger Tauern to the Rudolf Schober Hut, which lies above the mountaineering village of Krakautal in the middle of a stone pine forest. Further over the Hubenbauertörl and the Rantentörl we reach the Breitlahnhütte. Afterwards, the last section goes for several days through the Schladminger Tauern with its huts and the Klafferkesseln - a unique natural monument with about 30 lakes formed by the Ice Age. Via the Gollinghütte, trail no. 778 leads us to Rohrmoos and Schladming.

Details of the Central Alpine Trail 02 can be found (in German) on the site of the Austrian Alpine Association.